Escape From Beneath The Planet Of Revenge Of Son Of All Hail Teh New Flesh Ahoy!

Hmmmmmm. Maybe I should stop at TWELVE available Desktop Environments ... especially when the brand spanking new Cairo Dock DE's let me get my machine to look as bare-bones as I want it:


If loving this crazy shit like an only child is wrong, I never want to be right again.

Revenge Of Son Of All Hail Teh New Flesh Ahoy!

Ahh yes ... it seems the mutation process is proceeding according to plan ..... 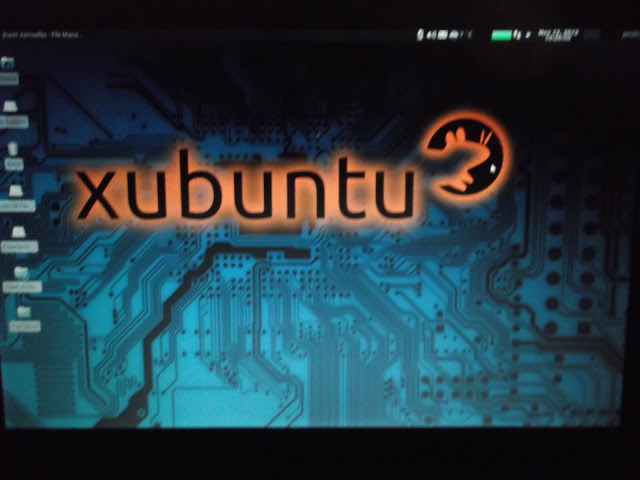 A few posts back I frothed mythopoetic upon the topic of my brand new OS, remarking in a comment that Ubuntu is actually in a functional sense not one OS but FIVE ... different session systems are available, two Ubuntus & three GNOMEs.

As of today, I've pimped up that number to seven. 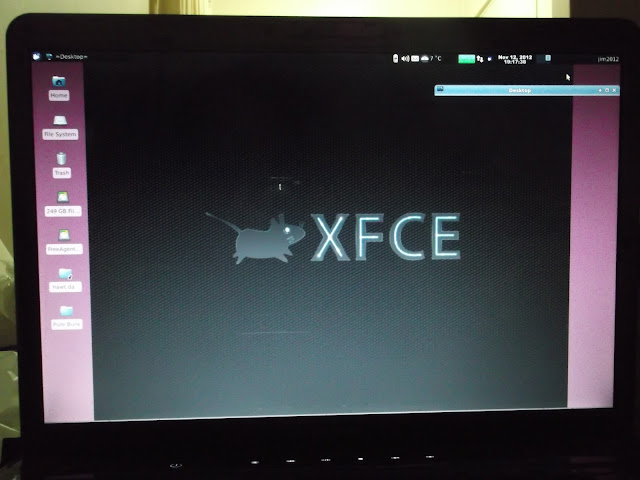 Of my two new newly-hatched spawn, I think I like Xubuntu the best ... but it's not as if I have enough real experience to make a worthy judgement call this soon. They're a (perhaps interdependant?) tag-team - I went for Xubuntu & got Xfce thrown in along with it - & they're both stripped down & faster alternatives to Ubuntu that run over its original core.

Note that the collorary statements can serve both as descriptors of & as rational guidelines derived from the interaction of the core values.

This ethics resembles a fractal.
Its output does not.
Posted by jim at 11:35 AM 1 comment:

All Hail Teh New Flesh Ahoy! 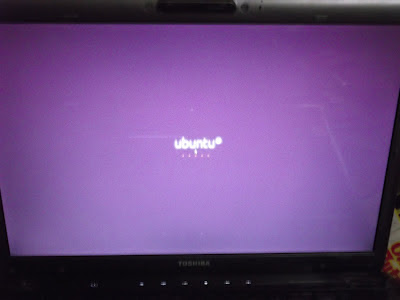 Runs like a racecar, makes virus coders cry & turn emo, heaps of bitchen apps along with a legendary range of possibilities if one were ever to become ambitious enough to go Full Skript-Kiddie ............. & it doesn't cost a motherfucking dime.

Nearest I've come to a problem with it is thinking I (or it) had completely ganked the audio ... I apparently popped it off by opting for a digital sound format - I presume it's an analog audio OS by default, which sounds just hunky-dory to me. 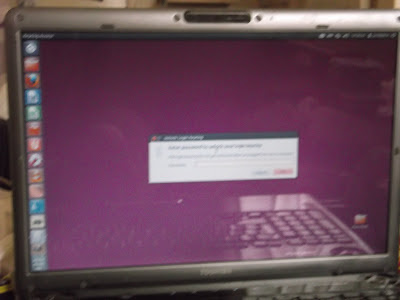 ADHD-friendly alternative (or if you are hardcore play both clips at once!) goes HERE:

Yes, surely there’s no way a mere neuroscience Ph.D. undergrad could, say, systematically build up an arsenal & sundry chaos-warez over time, simultaneously planning his dastardly deeds down to the last detail. Unpossibleness! IT WAS AN INSIDE JOB SHEEPLE.

Note that the oxygen for this batshittery is the FBI’s long legacy of propping up nasty people or even actively aiding them to blow shit up real good. Also that, despite what you might think, insecure/paranoid people ask a lot FEWER useful questions about what’s going on behind closed doors in matters of state.

"Okay…I’ll get plenty of shit for saying this, but…

They are peasants. Pure and simple. Despite historical access to knowledge and opportunity to participate meaningfully in shaping society for the better, the vast majority of humanity still wallows in ignorance, fear, and superstition.

I am beginning to suspect that it is physiological."


Television + HFCS + aspartame + trace metals = no use thinkbox no good any more.

"Six years ago – when Alex Jones was distributing DVDs of his documentary in New York City – the existence of lunacy like this was proof that THE LEFT WAS CRAZY! Then the black guy gets into office, and suddenly Jones et al go from left-wing lunatics to clear-eyed prophets. No one even acknowledges that the change took place. We have always been at war with Eurasia."


A thesis is floating about the Interwebs that posits that Jones & his fellow DVD-pimps are in reality a FBI/CIA psyop whose predicate is discrediting any citizens who advocate for an open & independant investigation of 9/11.

A similar theory concerning skinhead-friendly hate-jock Hal Turner was seen as pure Tinfoil Sombrero material … right up until the day Turner outed himself as an FBI informant. OOOOPS.

By Jones’ own standards, it is surely highly suspicious that someone so “aware” of the NWO’s evil plots – & so perpetually loquacious about their innermost workings – miraculously remains fit as a fiddle more than a decade after 9/11, even though the ability of the CIA to simulate death by natural causes is common knowledge by now (an ability, by the way, of which they themselves have openly boasted). I suspect Jones has not the slightest qualm about dining out or going on a camping trip because he knows damn well he’s in zero real danger (other than from one of his more bugfuck-crazy fanboys).

It’s worth it to check out Jones’ radio show if you haven’t yet done so – the first thing you notice is that close to half the bloody show is ads, ads, & MOAR ads. Makes one wonder: what kind of person sees everything going to hell & decides that the best course of action in response to this impending horrorshow is “IMA GONNA GET ME A WEBSITE & A RADIO SHOW SO I CAN MONETIZE THAT BITCH TO THE HILT”?

That slide-toward-fascism dollar? That’s a really good dollar right there.

Wowie Zowie - no posts show up on my blog right now. How special is THAT? Does blogspot impose a "posting too slowly" death sentence for blogs now? AFAF 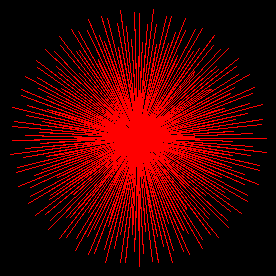 How I Killed Punk In Its Sleep

My talents were hired by anonymous progressives of a singularly radical bent, it seemed they wanted to warn the world of "sell-outs" taking freedoms away - or some such drivel. After fourteen centuries in the trade, one is apt to smile & nod, no matter what nonsense is provided for an excuse. One takes a 40% advance in eight figures, which is very nice indeed - & one sets to work. My medium is the dreams of my targets, fast clean & unstoppable. I never miss.

I bring them into lucidity first, if the format allows it. To lay in comfort as one brings down the rube : the acme of a noble old service.

Biafra was surprisingly smooth & easy. I nailed his whiny ass on a spoken-word tour. Popped in on some spy-noir crap & shook his hand. Thanked him for playing, & gave him a nice look at my astral machete. Did he ever scream!

Ran straight over his 18th-floor balcony railing like a real trooper. One down, six to go.

Of them all, Rollins was the most fun. For the record, the man gets - ahem,  used to get - some very interesting dreams. I have to develop a bio on waketime, & dreams, for the hit to click. For someone who  seemed to only ever do one "song" it was quite delightful to record ol' Hank's unconscious musings.

Of course, the wonders of apnia kicked Rollins' ass. At about the eleven-minute mark he stopped jiggling around & I felt the joy of a job well done. I've always been amazed at how easy it is to deactivate human lungs.

I could have appeared to him & rattled off some rant about a skinny little geek that was back for vengeance, in the one place where being hard isn't any use, you're a moth & I'm a flame, blah blah woof woof. I refrained - & left the poor slob to croak.

The Rotten hit was the only other worth mention, albeit a depressing one. "Who shot J.L." was his best attempt at wit. Then he tried to say he knew I would come { he didn't } & that he wouldn't try to escape { he did, sorry to say }.

Brains are almost as easy as lungs.  Panic at an unreal menace was an ironic fuel for a real peril. The hemhorrage was itself tres punk : John-Boy bled from eyes, ears & nose as his homely mega-marketed mug went from deep purple to bone white. Your punchline here.
Posted by jim at 3:04 PM 1 comment:

a special chamber in my heart slumbers

for the lady w/ the long silk hair

i wonder if she is still there

for one w/ braids of midnight hue

i wonder if she is still true

our folly was a crown of pretty jewels rare

for the season or two we dared agree

i hope she can yet get free

in another warm place i also find comfort

for the reasons' & rhymes' cruel cost

i wish she were never lost
Posted by jim at 2:53 PM No comments: 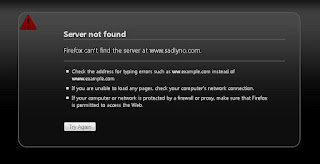 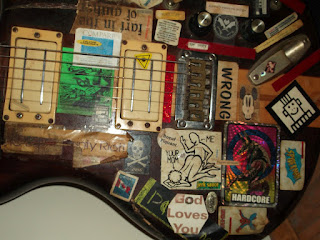 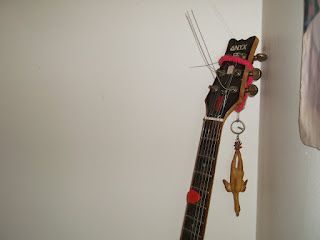 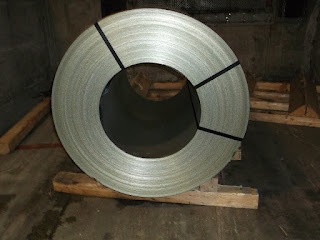 The trend in North American politics toward what might best be described as Faith-Based Nihilism can be expected to grow ever more potent & sincere as North America's dominance in geopolitics & economics continues to fade away. How far that trend progresses will be a crucial ingredient in determining the history of the 21st Century. It has provided diverse & abundant dividends for a very long time, yet is now visibly mutating into a deadly threat on a scale unknown to humanity since at least the last Ice Age.

The decisive conflict of our times that is already starting to crystallize is not Rich vs. Poor or Democracy vs. Dictatorship or Right vs. Left - it is Reality vs. Bullshit. The former are in fact the logically obvious byproducts of this timeless conflict. So visceral that it even creates its own battlefields within each individual, so critical that it can now quickly drive us into total extinction ... & so ubiquitous that it seems merely to be another droning mundane overtone of our Zeitgeist, not its prime conductor.

Does this thesis contradict my prior emphasis on mental hygiene? Some might argue so ... I would then ask them to show me how or where.

Our darkest shame in all of this is that, like Dracula, stupidity comes into its own only after its agents have given it leave to enter. One does not simply walk into Stupidtown - one first must both choose to burn down the reality that barricades the road to it & act on that choice, & what that does to one's psyche is dire in the extreme. Indulgence in folly can be cathartic, but making folly your god is rarely anything but morbid. No great intellect is needed to discover who is rallying under which standard (by their net output shall ye know them) ... & our collective tragicomedy is that by our very nature we abhor the idea of abandoning either one of these ancient & dearly beloved icons, at any price.